Old Street roundabout could soon be the site of the UK’s second tallest building – or a copy of Stonehenge.

This morning, Islington Council released a longlist of 39 architects’ designs to transform the area once the planned removal of the ’60s roundabout goes ahead.

One design, named the “Old Street Iris”, resembles a spaceship.

But possibly the most eye-catching is the “Tech Tower” by architect Mae, whose offices are in Naoroji Street, Finsbury.

Split into 10 layers, the equivalent of 60 storeys, only the Shard would be higher.

It would comprise tech company working space and public parks as you’ve never seen them before – with green space and trees on the majority of layers, including the roof.

In its submission, Mae said: “Greening the city in such a visible way, irrigated with collected rainwater, would provide psychological benefits as well as helping to reduce pollution and the urban heat island effect.”

The botanical gardens would also provide material for pharmaceutical research.

Another weird and wonderful design is by The D*Haus Company in Crouch Hill. It wants to build a huge screen – to show adverts, films and art – and a viewing platform above Old Street station. This is topped off by a copy of the Stonehenge stones.

Its submission for “The Stone Circle” says: “The final move to tie everything together was directly inspired by the historical importance and hedonistic atmosphere of Old Street and Shoreditch beyond. What are historic hedonistic meeting places? We thought one place that stands out above them all is Stonehenge and its stone circle.”

As reported by the Gazette in December, Islington Council, Hackney Council, Transport for London (TfL) and mayor of London Sadiq Khan launched a design competition to create an “iconic gateway” for the roundabout site.

Now the 39 design ideas have come through, people are invited to have their say at an exhibition open until March 2. It is at 2-4 Old Street Yard (first floor, building 3) between noon and 6pm on weekdays. After the public has had its say, a judging panel of councillors and design experts will make a potentially terrifying decision. 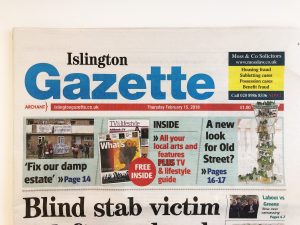